It was Easter weekend and we spend a bit of it exploring as we like to do. This time round we went up to The Whitaker Museum which was a lovely, well presented collection - and had lots of things on for kids! - Which we hadn’t anticipated the impact of parking on. We had a little stroll through the park and then went on to Ramsbottom - which I might talk about in a future post.
The next day we drove over to Rochdale and did their Blue Plaque walk (pdf). Something which seemed to be well planned but in execution could use some work. It’s hard to see the tough time that some towns have had in the recent decades, a similar walk around Accrington recently lead to similar conclusions. These places are beautiful and have such great buildings, but they will also need large injections of cash to make a cultural experience such as even a Blue Plaque walk attactive to out of town visitors.

Anyways, the point of the post was to mention that I am still attempting film photography and learning from new failures. A few months ago I ran out of bulk HP5+ film and switched to Rollei Retro 400S and some reusable 35mm canisters. It was a struggle, I don’t use film quick enough to remember how to reload the bulk loader, and the new reusuable cannisters seem to need a lot more securing at the start of the reel - to my utter horror when I’d got it open in the changing bag for processing, there was no film in the cannister! It was all still in the cannister, so I had to get it out unseen (obviously it had gotten itself stuck in a takeup spool in the EOS5) - doing this also in a warm conservatory the inside of the bag was quickly becoming very ‘humid’.

I opted to rinse the film once I’d got it in my tank, not something I normally do. But I was pretty glad given the colour of what came off, it obviously had some coating. Ended up doing 12:15 min at 22.5degC in Ilfosol 3 at (1+14). I wasn’t doing anything fancy with the camera, just ISO 400 as I had no idea what the properties of the film would be like. 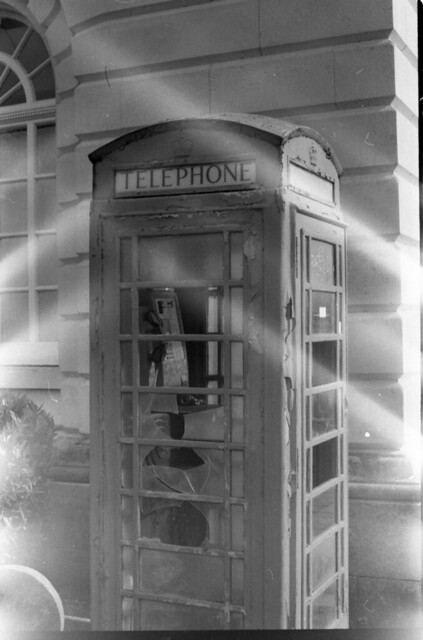 Yeah so, upon grabbing the roll out of the tank, I could see straight away the light coming through the spoket holes when I’d taken the cannister out of the camera (but left the film in!). Ah well, makes for an interesting effect!

I’d like the contrast to be better, but better luck next time?