My Grandfather was a bit of a collector. As kids we used to stare at all the oddities he’d amassed. His house was lined with books and art, but he also had cabinets full of microscopes, ink wells and cameras.

As a child I would look at them a little, but I didn’t take too much interest. At some point he gave me a microscope which I still have.

But the cameras… Again, when I was younger I didn’t take much interest. I think I was more focussed on the future, where things were going rather than looking to the past. I would show him my digital camera and he would stick with his film one. I wish I’d paid more attention, but he was always with a camera, I don’t really know much about what he did with the photos though.

When he died the cameras got put into storage. It was years later when my interest in film photography arrived and this mythical collection of boxes was spoken of. There was a ‘catalogue’ somewhere of what they were, which I recently was handed. The metadata from the pictures of the cameras on there dates it as May 2011.

I left the larger folding cameras with my Dad and brought back home the smaller ones, the ones I was more likely to try to use and went through them, trying to figure out how they worked, opened up. What models they were, what film thet would need.

I concluded that there were no ‘show stoppers’ in there, no mythical Leica or something. I wondered how he chose them all, did he buy them individually or as a job lot? I don’t think any were bought to be used by my Grandfather, I do have the one he used - an Olympus OM-1 - released 1972.

I think the batch has one 35mm based camera, but I’m currently reluctant to try it as the winder doesn’t seem to be reliable. So what of the rest?

Well they seem to be mostly 620 based.

At first I said to myself, oh well, end of the line. But then I happened on some articles about adapting or rerolling 120 format film and then even some 3D printed adaptors for 35mm film. Well I have a lot of 35mm I thought, so I ordered one and waited. 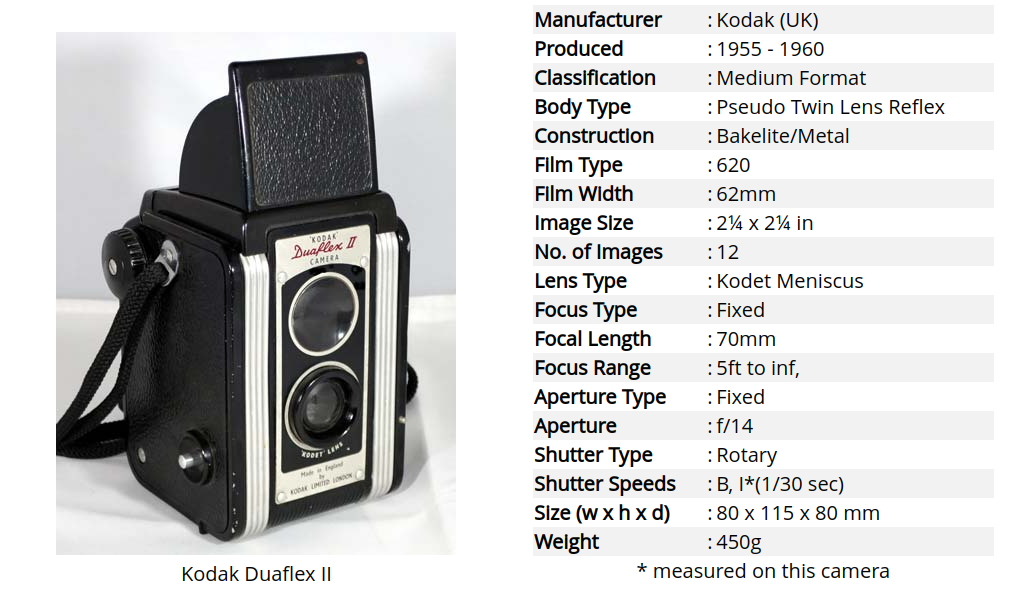 It arrived yesterday, so I got out one of the simpler looking cameras, one I thought was in good order and tried it out - a Kodak Duaflex II. I made sure to tape up the exposure number window at the back but the film felt really tight to roll on with the adapter. OK - I’m using bulk loaded film, but I think maybe that the adapter for the 35mm film is a little big.

I haven’t taken the film out of the camera yet, I’ll need my changing bag for that so that the film can be wound back into the canister. I’m hoping for some cool sprocket exposed shots, but who knows?! I could have easily exposed everything to the light just in the process of getting the film off the bulk loader in the first place. Ah well - the excitement of film!